Charles Thibault, a former university professor, had also been President of the French National Centre for Scientific Research (CNRS). He died on August 20, 2003 at the age of 84, after more than 60 years dedicated to scientific research, higher education and administration of research.

Charles Thibault displayed his activity during his very long career, notably within the French National Institute for Agricultural Research (INRA), in a tremendous number of directions. Most were aimed at improving the quality of agricultural and animal productions in the France of the post-war years. However, his commitment had always been to consider that significant progress could only be brought by basic science research, supported and committed in a trans-disciplinary spirit. The scientific fact of Charles Thibault was naturally to have obtained in 1954 the first successes of in vitro fertilisation in a mammal, the rabbit (Fecundation in vitro of rabbit egg, Dauzier L, Thibault C, Wintenberger C, C R Hebd Seances Acad Sci 1954, 238: 844-845). His alumni, students or already qualified researchers, remember when they required his opinion, the recurring questions he advisedly delivered back to them "What are you doing? Where are you? What are your plans in life?" In other words, a way of asking questions: "What is your rationale? What do you try to demonstrate and will it be useful for the progress of general knowledge? Are practical applications amenable?" For this reason, in the continuation of an event organised on March 18, 2004 in Jouy-en-Josas, in the presence of Mrs Marion Guillou, General Manager of INRA, the best way to honour Charles Thibault's memory was to organise a scientific symposium dedicated to the scientific domains that he had contributed, mostly himself, to build and for a very long time to teach at the Pierre and Marie Curie university of Paris, the study of Reproduction in Vertebrates and Man. To mention Etienne Emile Baulieu's terms, President of the French Academy of Sciences, who was kind enough to introduce this symposium "Charles Thibault had fundamentally this perception that we all have when we work in research and in the laboratories, that finally what matters is what is really made in the front of nature, physiology of reproduction, possibly also pathology. He was really one of those who believed fundamentally that true creativity comes to those that are in contact with the inherent objectivity of nature". The idea of the symposium was to expose in the most possible compact way the evolution for about ½ century, of the position of some fields of research in biology of reproduction, without neglecting ethics and legal questions inferred by the development of the techniques of assisted human and animal reproduction. A fair number of the interlocutors of Charles Thibault, French and foreigners, colleagues or alumni, were solicited to give the contents of the symposium. All answered favourably although some, regrettably, were not able to for different professional reasons, directly attend the symposium. The symposium was organised with the joint financial support of the French National Institute for Agricultural Research, the National Centre for Scientific Research and the Department of Education and Research, in the Carré des Sciences, on March 18 and 19, 2004 in Paris. To all and notably to the oral and text contributors of the communications presented on this occassion, we address our most sincere thanks, as well as to the numerous persons of the Department of Communication of INRA, who allowed the material and functional organization of the symposium. We are particularly pleased to present in the texts which follow, and with the assistance of "Reproduction, Nutrition, Development", a consistent "sample", although not exhaustive, of the way research has been done since the first research performed by Charles Thibault at the beginning of the 1950s. 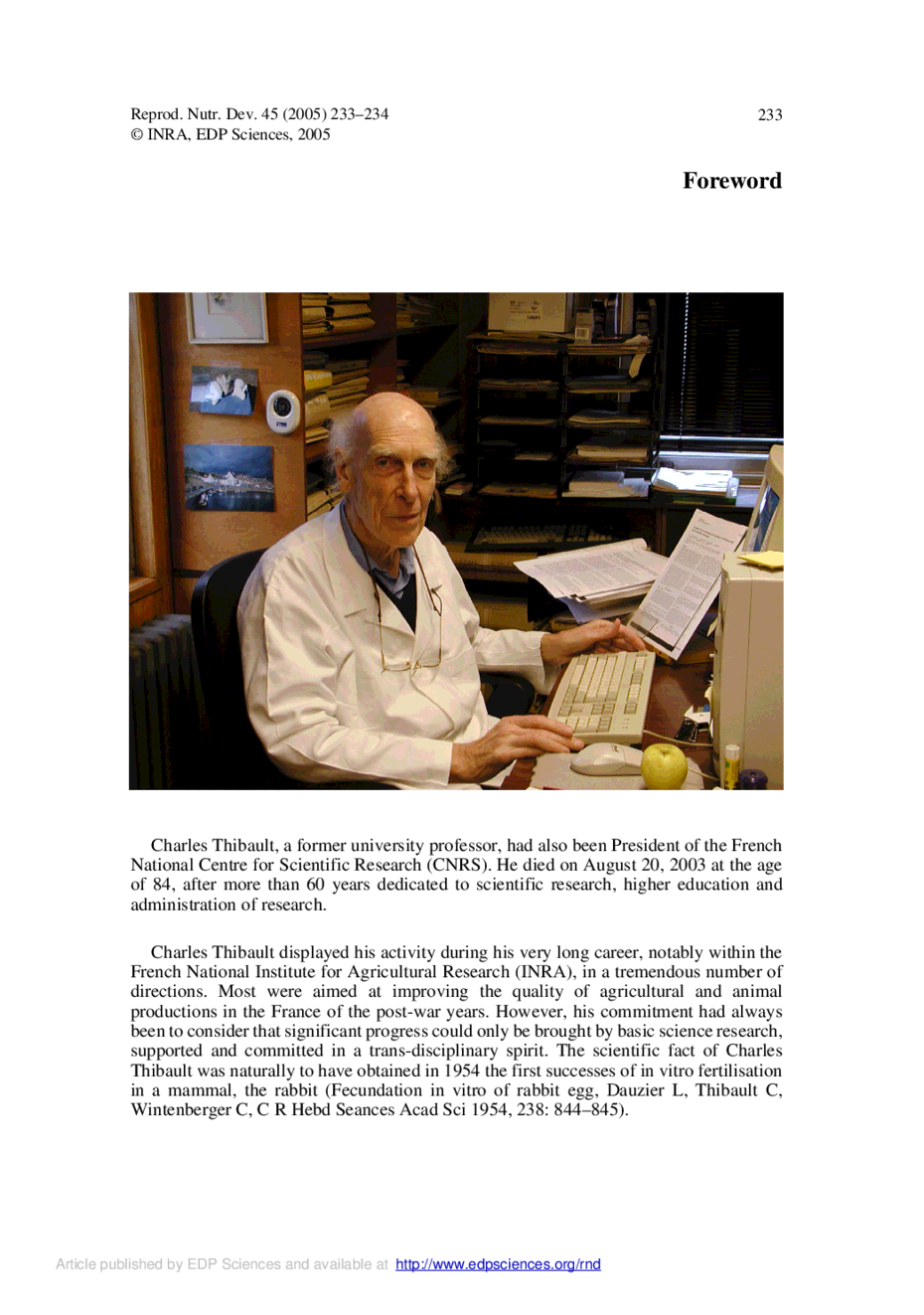